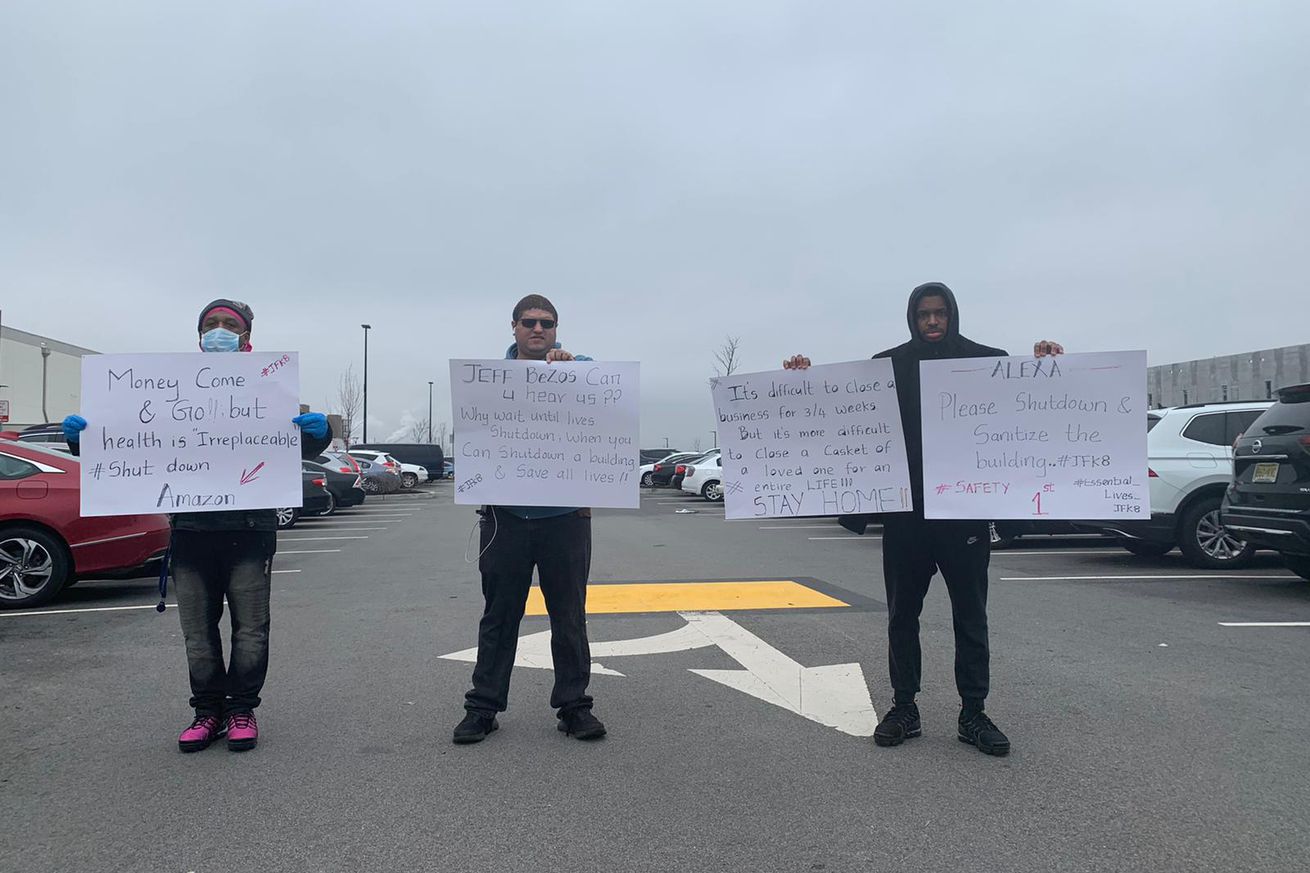 Workers at Amazon’s Staten Island, New York, fulfillment center walked out today to protest the company’s response to COVID-19 infections among its warehouse employees. Amazon has confirmed one case of COVID-19 at the New York facility, but workers say there have been at least 10 and that the company has failed to notify workers or properly clean the warehouse. Now, they are calling for Amazon to shut down the facility for two weeks for deep cleaning.

“The goal is to get that building shut down, and they will shut it down, because no packages, nothing gets out the building without associates,” says Derrick Palmer, who has worked at the facility, JFK8, for four and a half years. “This is a pandemic. People are literally losing their lives because of this virus. And [Amazon is] not taking this seriously. They’re not giving us our respect that we demand. We’re not going to ask for it. We’re going to demand it, because at the end of the day, we’re the heart and soul of that building, not the managers. They’re back in the office. We’re in the front lines working.”

Workers at 19 US Amazon warehouses have tested positive for COVID-19, according to local news reports. So far, Amazon has closed facilities only when forced to do so by government order or worker protest. Last week, the company indefinitely closed a returns processing warehouse in Shepherdsville, Kentucky, after three workers tested positive and the governor ordered it shuttered. On March 18th, a sortation center in Queens, New York, was temporarily closed for cleaning after workers walked out upon learning of a positive COVID-19 case. Employees learned about the case from co-workers and say they had been expected to come to work.

The failure to notify workers when someone at a facility tests positive appears to be systemic. Last week, The Verge spoke with workers at several warehouses across the US who learned of COVID-19 cases from co-workers. At JFK8, Palmer says the first case was confirmed on March 12th, but workers were only told several days afterward when managers walked the floor and told employees in person. But the facility is staffed by more than 4,000 workers and is 855,000 square feet, so many learned of the incident through hearsay much later.

Amazon has a strong infrastructure for keeping its warehouse employees informed. For example, when the company announces mandatory overtime, Palmer points out, the company sends out texts and emails to every worker. “With this incident, they have not sent out one text — nothing at all,” Palmer says.

Amazon says it has intensified the cleaning of its warehouses in response to the COVID-19 pandemic, but workers at JFK8 and elsewhere say the measures fall far short of what’s needed. Palmer says shifts of about a dozen cleaners work at JFK8, too few to properly disinfect such an enormous building. (Workers in other warehouses in the US have expressed similar concerns about understaffing of cleaning crews.) While Amazon has stopped daily stand-up meetings and staggered schedules to minimize workers clustering together, certain roles in the warehouse, like the packing department, still require employees to stand in close proximity, and workers often pass items between each other.

JFK8 is the first major action at an Amazon fulfillment center

“The way that the department is set up, everyone is on top of each other,” Palmer says. “It is literally impossible to maintain the social distance within those departments, and they haven’t been practiced, they haven’t tried to adjust that at all because there’s no way they can do it.”

In Italy and Spain, where COVID-19 outbreaks have been spreading longer, Amazon refused to shut down facilities after workers became infected, prompting protests. Earlier this month, a group of senators wrote a letter to Amazon CEO Jeff Bezos expressing concern for the safety of Amazon workers and asking, among other things, whether the company would temporarily shut down facilities and provide paid leave for workers if someone tests positive for COVID-19. A petition among workers calling for a similar approach has garnered more than 1,500 signatures. The workers at JFK8 are also calling for paid leave while the facility is shut down for cleaning.

In a statement, Amazon called the workers’ claims “unfounded” and said its employees are “heroes.” The company is taking worker safety extremely seriously and has instituted several changes, the company said, including intensifying cleaning and screening worker temperatures. Regarding closing buildings, the company said it consults with health authorities and medical experts, and if a diagnosed worker hasn’t been in the building for some time or if the area where they worked has already been cleaned during the regular course of business, the facility may not need to be closed.

The pandemic has shown a spotlight on the role of workers at Amazon, Instacart, and other goods-delivering tech companies. No longer laboring in the background of digital interfaces, they’re increasingly being recognized as frontline workers providing a vital service to millions of Americans who are being told to stay home. Both companies are trying to hire tens of thousands more people to meet surging demand. Amazon is giving its workers letters to carry saying they are “essential” employees, delivering “critical supplies directly to the doorsteps of people who need them” and should be allowed to continue their jobs amid shutdowns.

But the pandemic also exposes these workers to new risks, and workers say companies have been slow to adjust policies and protections. Instacart and Amazon now offer workers diagnosed with COVID-19 or placed into quarantine two weeks’ paid leave, but that doesn’t help workers who have COVID-19 symptoms but can’t get tested. Amazon warehouses have been optimized for speed and efficiency, and workers say the intense pace leaves them little time to use cleaning material that is often in short supply.

Today, Instacart workers are going on strike, calling for expanded sick leave, hazard pay, and protective equipment. Workers at Whole Foods, which is also owned by Amazon and faces unprecedented demand for delivery, are striking tomorrow. JFK8 marks the first major action at an Amazon fulfillment center, and workers at Amazon warehouses across the country have expressed similar concerns.

“Alexa, please shut down and sanitize the building.”

Shutting down a fulfillment center for a prolonged period would threaten Amazon’s ability to continue delivering products, but refusing to do so and failing to assure employees their safety is being taken seriously pose potentially greater threats to the company. Already, workers are staying home rather than venturing into crowded warehouses, choosing to forgo pay that Amazon recently increased rather than risk getting infected. Delivery times for some items now stretch to a month or more. Now, at JFK8, workers frustrated with the company’s coronavirus response are trying to shut down the facility themselves.

Around 1PM on March 30th, workers filed out of the New York warehouse, many wearing masks and bandanas over their faces. “Alexa, please shut down and sanitize the building,” read one of the signs. On a live stream of the protest, workers expressed frustration with not being told about infections at the warehouse and said many were choosing to stay home without pay.

“We’re not done here. Today was a cry for help,” said Chris Smalls, a worker at the facility and one of the walkout organizers, wearing a black bandana as he addressed protesters. “Today was a win for us, but it’s a battle and the war is not over. We’re going to go to City Hall possibly tomorrow morning. We’ve got to get the government’s attention. Just like in Kentucky, the government has to step in and close the building down.”

Update 3PM ET: The story has been updated to identify one of the speakers at the protest, Chris Smalls.

Can Smart Thermostats Ruin Your Furnace?

Thermostats Mike Gerrard - March 16, 2019 0
It may sound preposterous, but some people are afraid smart thermostats are bad for heating and air conditioning systems. Here’s the good news: You...

Lights & Appliances Mike Gerrard - May 14, 2019 0
If you just go to Amazon cold looking for a robot vacuum to buy, you’ll probably be surprised, and possibly even overwhelmed, by the...